It’s been a quite busy March and April for Welcomments. Here’s everything that happened during the past 5 weeks.

During the past 5 weeks, Welcomments got 14 new users. This translated to 8 new websites where Welcomments was integrated.

Huge thanks to everyone for trusting a beta product and providing valuable early feedback!

Hugo is one of the most popular static site generators along with Jekyll.

While in theory, Welcomments can work with any static site generator, it’s not fun to come up with the templates on your own.

That’s why, along with Jekyll, we now have an automatic setup wizard for Hugo as well: 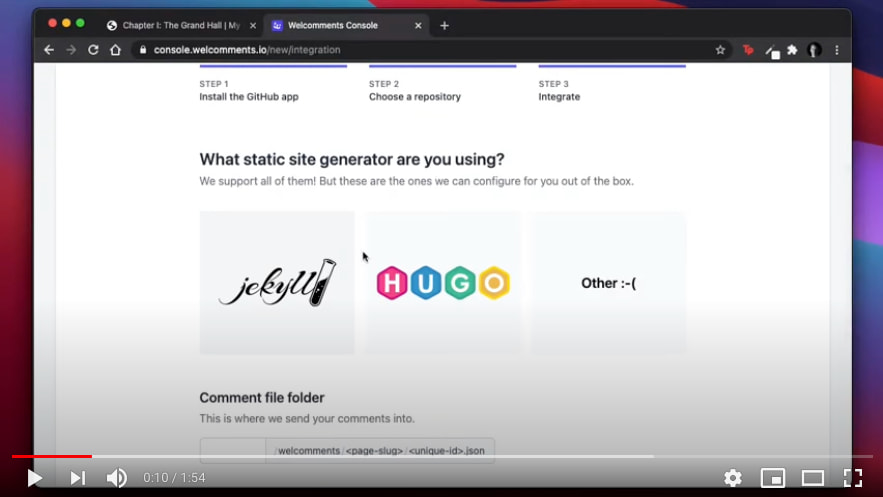 Just click some buttons at app.welcomments.io/new/choose and we’ll set you up with a pull request with all the required changes to get started.

How nice is that? Pretty nice if you ask me.

The initial Welcomments GitHub app integration was built on a very shaky ground.

It was something that was thrown together very quickly and it pretty much supported just the very specific happy case. Anything outside that - like installing it on an organization repository or another user account? Good luck.

It took a good week of my time, but that’s now fixed: 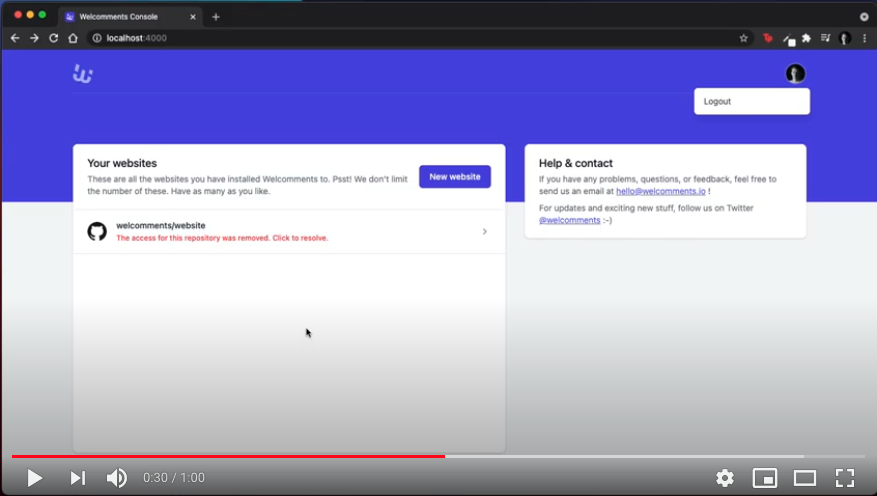 And if you accidentally mess something up, it tells you about it, and tells you how to fix it.

This meant that if a user chose to input their email address while posting a comment on your website, and someone replied to their comment, they got an email notification about the reply.

GDQuest requested a possibility of receiving an email notification every time someone comments on their website. 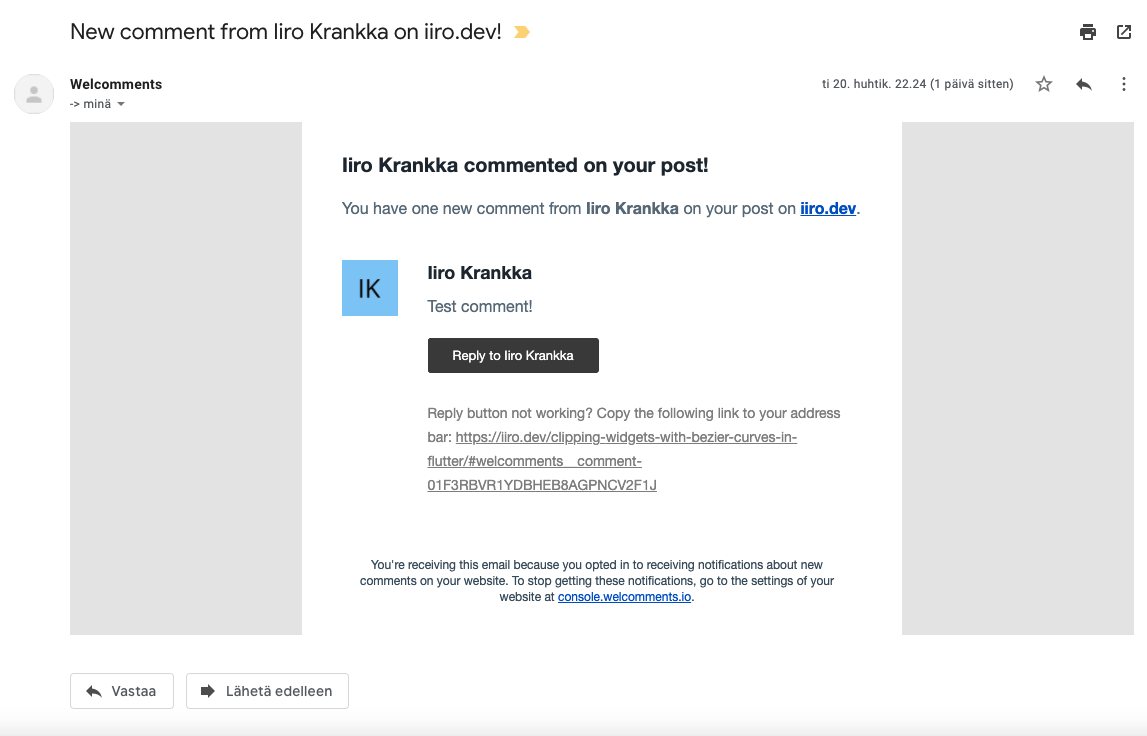 For most websites, this should be enabled by default.

If that’s not the case, you can go to your website’s settings and enable it manually:

Even though Welcomments is 100% free during beta, for transparency, there’s a pricing page that has been up for quite a while.

The pricing model used to be fixed until 200 comments / month, and then a fixed amount per each comment. Some people expressed very vocally that they found this pricing model weird.

After giving it some thought and talking to some friends about it, I decided to have a fixed monthly price with no usage based pricing. I added a disclaimer that if a website expects to get more than 500 comments a month, they should reach out to me first.

Worst case scenario estimates are always just that though - estimates. I’m sure I’ll adjust things when I get some more usage data.

For the past month, Welcomments has been a very quick proof of concept that I stitched together.

As I started getting a lot more interest than I initially expected, I knew that there’s something to this little commenting system of mine. But I couldn’t see how my quick proof of concept would be viable in the future.

Usually, complete rewrites from ground up are a very bad idea - but that’s exactly what I did. It was a mess of Firestore, Firebase Functions, Dart on Google Cloud Run (for faster responses on comment forms), and VueJS for the admin console.

I decided to move fully into Elixir and PostgreSQL. Now there’s just a single project and server that contains all in one place, which I can run, develop, and test inside one IDE window.

I’m hoping that this allows me to really pick up the pace and add some features that have been asked for a multiple times :-)

Feel free to comment anything - and I mean it! If you don’t have any smart words in mind, it can be just a simple message saying “test”.

You can also reply to this comment. If you leave your email address while posting a comment, you’ll get an email notification every time someone replies to you! You can of course click a link on the email notification to unsubscribe any time.

Just in case you’re unfamiliar with how Welcomments works - it delivers every comment as a JSON file to a GitHub repository. Then Netlify rebuilds your Jekyll or Hugo website, and the comment will be pre-rendered as 100% static HTML.

For example, the JSON file for the parent comment is here. There’s no Javascript used to render it - view the source of this web page for proof!

You can completely disable Javascript and the comment will be displayed just fine. Commenting and replying without Javascript is also fully supported!

This is a test

Keep up the good work, Iiro.

That’s already possible - you have full control of how the form and comments look, so you can choose whatever you like! However, I think at some point I might write some docs how to fully integrate something like that so that it’s easier.

As you might notice, blockquotes on the above comment were not working properly. The “>” was accidentally encoded into an HTML entity before running it through the Markdown converter.

That’s now fixed. Beta software and all, you know… :-)

This is a test of XSS protection

This is also a test.

Hola me no here.